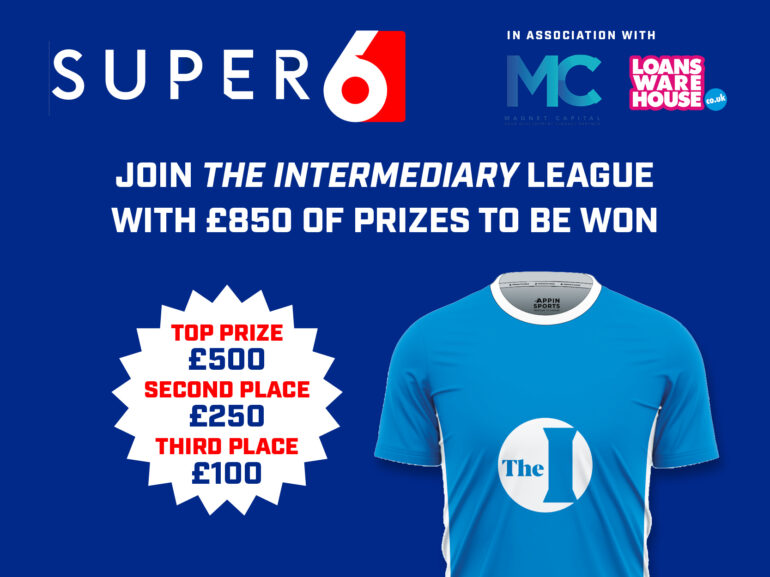 As the Premier League season approaches, The Intermediary is launching its inaugural Super 6 League.

Starting with the opening round of fixtures, players, as part of the main Sky Sports Super 6 League, will have the opportunity to win £250,000 by correctly predicting the scorelines of six separate matches.

If nobody claims the weekly jackpot throughout the leagues the game’s highest scoring player will receive £5,000.

Players are awarded five points for correctly predicting the result of a match, although they will still receive two points for guessing the outcome of a game with the wrong scoreline.

The league will start on August 5th and run until the conclusion of the Premier League season.

In addition to the overall Super 6 prizes, the highest-ranked member of The Intermediary League will be able to claim a £500 prize or donate it to the charity of their choice.

The Runner-up will receive, or be able to donate, £250 courtesy of development finance lender Magnet Capital.

While third place will win £100 for either themselves or charity thanks to Loans Warehouse.

Super 6 is free to subscribe to and updates will be carried on the site throughout the season.

You can join here, and the code for the league is 7N6M2C.

To be in with a chance of winning a prize we also ask that you provide your preferred email address here for ease of contact should you win.

Otherwise, winners will have to contact The Intermediary with proof of ownership of the winning account on completion of the league.

Should the winners not identify themselves within 14 days of the results the prizes will roll down to the next identifiable winners.

In the event of a tie, prizes will be divided equally among the tied players.