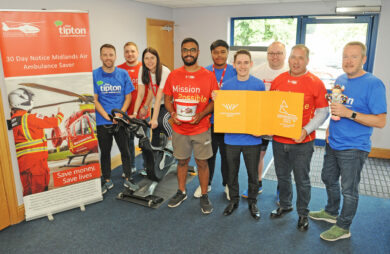 A team of 16 staff from the Tipton and Coseley Building Society has been raising money for local charities by completing a cycling challenge.

The team took part in an eight-hour spin cycle in the banking hall at Tipton Head Office, clocking up over 100km between them.

The charity cycle took place on 4 August, the same day as the men’s and women’s Commonwealth Games cycle time trial, which covered parts of the West Midlands.

The athletes taking part in the time trial cycled passed the Tipton’s branch in Sedgley on the day.

Tracey Randle at the Tipton said: “We would like to thank everyone who supported our charity cycle day.

“It was made even more memorable because the Commonwealth Games cycle time trial passing our Sedgley branch at the same time.

“Our team all enjoyed the day and hope the money we have raised will make a difference to the charity.”